Let’s look at some common complaints for the Precision Blend System or PBS.

“… the oil pump does not run … system will not transfer oil to the engine oil tank ….”
There are a couple of checks /possibilities here:
• The first check should be a visual one. Look for corroded or damaged wires and connections; Remote Oil
Tanks are often mounted in areas that are exposed to more moisture.

• Operate the override switch mounted near the Engine Oil Tank to see if the pump will run. If it does, either the
engine tank’s float assembly is inoperative or the oil-controller (located inside the ECU) is faulty. To check the
float assembly, disconnect the wiring plug and ground out the blue-green wire on the wiring harness side. If
the pump and wiring are in good condition, the pump should stay on. Grounding the blue-white wire will turn
the pump off.

• Verify that the pump does operate by
disconnecting the harness going to the
Remote Oil Tank and applying straight 12
volts across the two leads (brown lead
positive / blue lead negative) using some
jumpers. 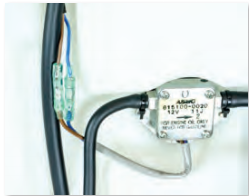 • If the pump does run based on the above checks, check the engine oil tank sensor with an ohmmeter. The
procedure is in the service manual.

– CAREFULLY remove the sending unit from the Engine Oil Tank. There is a felt type washer on the bottom of
the sending unit. If it stays in the oil tank, it could clog the outlet to the oil pump resulting in no oil getting to
the engine.

– SW2 is the switch that sends the signal to the ECU to turn the transfer pump ON. Connect an ohmmeter
across the blue/green–black leads in the connector and move the float over the area of SW2. The meter
should indicate continuity when the switch CLOSES and O.L. when it is OPEN.

Test all 3 switches in this manner using the color
code chart to the right.

SW1 sends the signal to the ECU to turn the
pump OFF.

SW3 sends the signal to turn the warning horn
ON and put the engine in the Reduced RPM
Mode.

If all of the tests listed above check out
(pumps runs, switches check OK, filter is good) the problem could in the ECU. 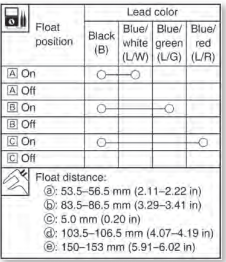 • Check the filter on the outlet side of the Remote Oil
Tank – this is a common problem. Lots of things can
find their way into the oil tank – especially the seals
found on the tops of the oil bottles! It is recommended
that this filter be part of any routine maintenance
program.

• Is the oil line between the Remote Oil Tank and the
Main Engine Oil Tank kinked, pinched, or twisted? This
could be possible if the tank had ever been removed
for service or a re-power situation and was clamped
down on the hose.

Other symptoms to watch for:

Overfilling: An overflowing Main Engine Oil Tank can result from removing the sensor assembly from the Engine Oil
Tank, and incorrectly re-installing it. There are arrow marks on the cap and filter and should be aligned (shown below
on the left). There is an offset that fits into the bottom oil outlet going to the metering pump. If misaligned, it could
bind the float and not allow it to stop the transfer pump from running. The foam washer, highlighted in the image on
the right, must be in place. If not, it could be trapped in the outlet going to the metering pump restricting oil flow.

Always refer to the appropriate service manual for correct information on wiring, specifications, and assembly
procedures.

Leaking when tilted: While the outboard is tilted, a leaking rubber cap on the Main Engine Oil Tank can result from
improper assembly or from being out of place. A plastic tie-wrap around the rubber lip often cures the leak; if not,
replace the sensor.

Can I bypass PBS?

Here’s one I’m sure you have heard:

“I want to bypass the PBS system and pre-mix my fuel and oil in the gas tank because I don’t trust it….”

Let’s address the obvious first: you cannot bypass the oiling system and run strictly pre-mix on an HPDI! Why?
Think about what the letters HPDI stand for: High Pressure DIRECT INJECTED. Fuel is injected directly into the
combustion chamber; oil is injected into the intake manifold to lubricate the bottom end. With the PBS system
disabled there would not be any lubrication passing through the bottom end as it does on a carbureted engine
when the oil is mixed with the fuel (or, like the old OX66 engines, oil injected into the vapor separator)! 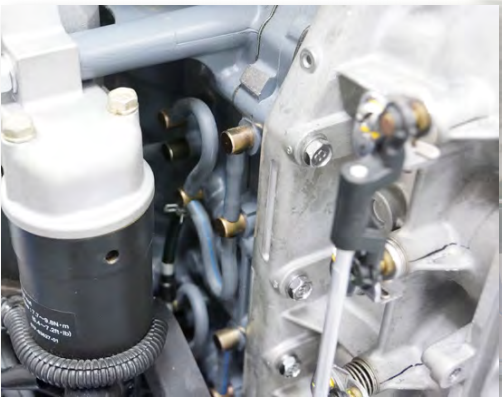 Pictured above are the oil lines on an HPDI connected to the intake manifold behind the throttle bodies. These
throttle bodies only flow air which carries the oil through the power head.
This is why pre-mixing for break-in is not required on HPDI. Some that are pre-mixing as a “safeguard” are
wasting oil and could cause engine damage by causing the engine to run too lean, because the extra oil is displacing
some of the fuel that should have been injected.

Secondly, why would you want to bypass it in the first place? This system has proven to be so reliable that Yamaha
has used it for decades with very few changes.

If you are having issues with the PBS system, odds are it is an easy fix, or maybe they do not fully
understand how it operates. 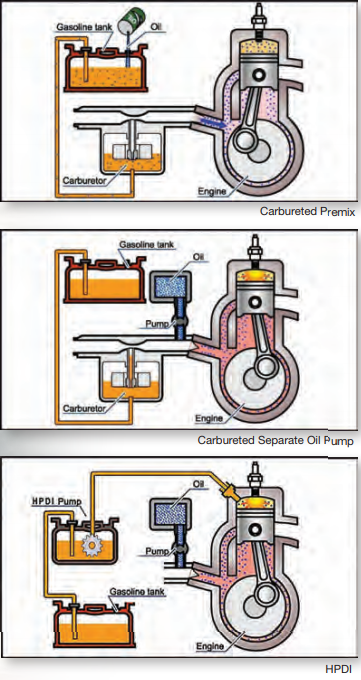 Notice in each case the oil is added to the bottom end of the
engine to provide lubrication to crankshaft, connecting rod,
and piston and cylinder.