Motor break-in? Now there’s a loaded question. Ask a group of boaters how to break in a new four-stroke motor and you’ll probably get at least as many different theories as there are people in the group: Boater #1 – Yep, just tie it up to the dock, shift it into gear and let it run for a couple of hours at about 1000 rpm. Boater #2 – No, run it like you stole it. Boater #3 – No, you got
to baby it for the first two hours and no more than half throttle for the next 6 and no more than three-quarter for the next 4. Boater #4 – Nope, just fire it up on the hose for an hour or two and
it’s good to go. 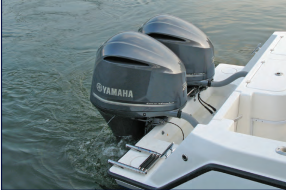 Actually, they are all wrong. Yamaha’s four-stroke outboard break-in procedure is clearly written in the Owner’s and Service Manuals. The same basic procedure has been used for many years. The boat must be operated under load, which means in the water, with a prop installed and unrestrained. The first 10 hours of operation should be run using the following running pattern:

1. First hour – run the motor at varying speeds up to 2000 rpm
(approximately half throttle if there is no tachometer).

2. Second hour – accelerate hard enough to put the boat on plane
(do not use full throttle) then back off of the throttle but keep the
boat on plane.

3. Next 8 hours – run the motor at all speeds but avoid continuous
running at wide open throttle for more than 5 minutes at a time.
4. After completing the 10 hours of break-in, commence normal
operation.

Why is break-in important? During break-in, the microscopic peaks created during the machining process are shearing off. This shearing action creates the desired surface finish for proper piston ring to cylinder wall sealing while leaving microscopic valleys for oil retention. The factory-prescribed break-in procedure has been formulated to properly load the motor which in turn generates the correct amount of powerhead temperature and combustion pressure required to ensure the desired surface finish.